Rhythm is the timed sequence of sounds in music.

Most rhythm has a regular beat, which can group a finer division into larger units for practical counting, and which is also used for dancing. A cycle of beats is called the time. Within cycles of beats, there are usually stronger and weaker beats (sometimes also called arsis and thesis). The subdivision of each beat can be called the ”feel”.

Basic subdivisions of the beat

Even though there are a great many possibilities already within these limits, I further limited the examples to a maximum resolution of 1/16 note, meaning that no smaller notes are involved, notated and listed. These rhythms do reach a certain degree of complexity, and even more complicated rhythms usually involve tuplets.

Still, the “catalogue” below lists commonly encoutered rhythmic building blocks, and studying -and being able to quickly recognize, clap or tap- these examples, greatly enhances one’s ability to connect and integrate one’s hearing-reading-singing (clapping)-writing as was explained in the introduction of this outline.

The basic subdivisions of the quarter note for binary time signatures, up to a resolution of 1/16 notes, is found on the image below.

binary subdivisions of the quarter note

The building blocks exercises with these binary subdivisions are found here:

The basic subdivisions of the dotted quarter note for ternary time signatures, up to a resolution of 1/16 notes, is found on the image below. 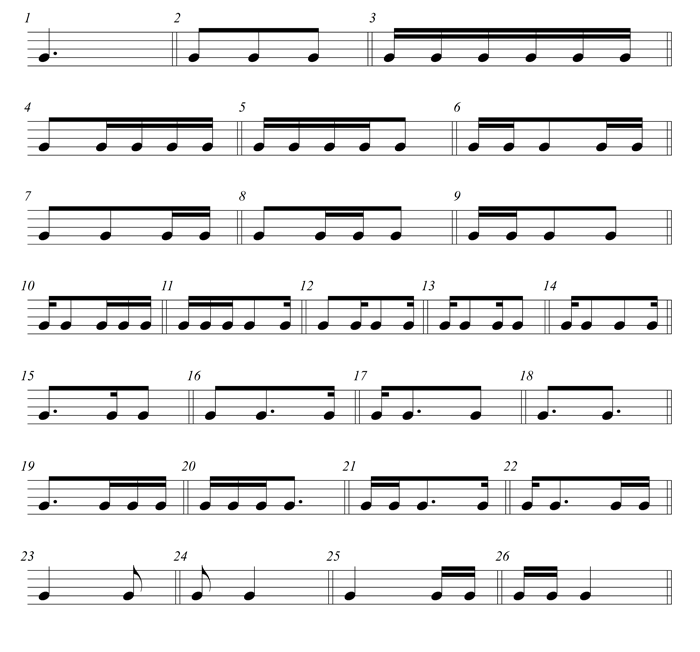 The building blocks exercises with these ternary subdivisions are found here:

Polyrhythm is the simultaneous presence of more than one beat or feel in the same music.

The patterns below present the basic polyrhythmic patterns based on 2, 3 and 4 in mutual combinations. These should be practiced one after the other with two hands, while always keeping the beat in the same hand. The beat patterns here are notated with notestems downwards.

In the examples every first bar offers a tuplet notation, every second bar offers a notated analysis with the smallest common beat-particles regrouped by tying together, every third bar offers a practical notation which is best for performance (and especially much clearer than duplets and quadruplets).

Some more advanced exercises with triplets are found here:

Melody is created by a sequence of different single pitches in time.

The following exercise makes use of the hexachord and a leading tone, 6 above and 1 below c.

To be sung without accompaniment, all in this order, without halting, in major: 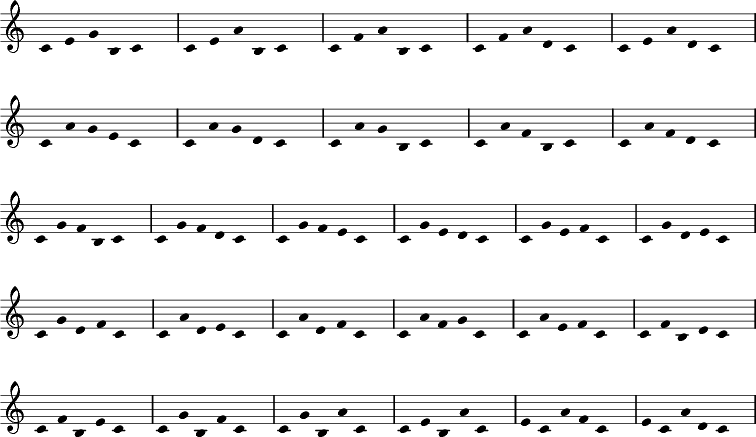 All these melodies above should also be practiced in the church modes; below they are given in harmonic minor: 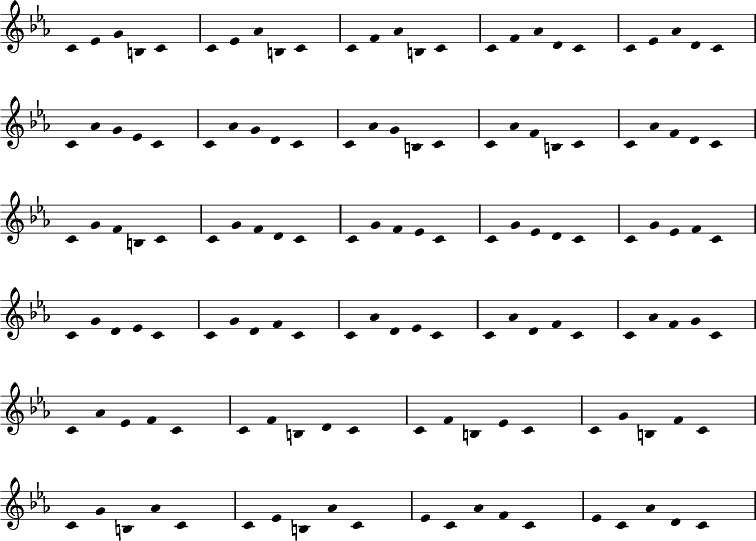 The following complete and printable versions of the melodic building block solfeges in pdf can be found here:

Harmony is created by the interrelationships of different pitches together in time; the timing of the sounds used, called harmonic rhythm, is an ingredient as essential as the sounds themselves!

Whereas harmony in general is a concept which describes the relative sounds of large groups of tones, the term functional harmony is used for a specific, yet generally used, type of harmony, generating the expectation of a central tone or chord, called the tonic, by means of tension and resolution.1

Functional harmony can create story-like structures in time with these elements, relatively easy to hear and follow, even for non-trained ears.

Not all harmony is functional! Harmony can also be non-functional, in which case the expectation of a tonic is absent, even though an harmonic focus can be present. Among non-functional harmony there exist such phenomena as modal harmony, parallel harmony, and atonality.

A degree is a harmonization of a particular scale-step, indicated by a Roman numeral.

A degree exists in relation to an audible functional harmonic center, called the Tonic, symbolized by a I. Relative to this I, other degrees are numbered around it. If another degree than the I forms a temporary harmonic center, this is created by at least one Secondary degree, usually a Dominant sometimes accompanied by a Subdominant degree.

Any scale can be harmonized by forming triads, seventh- or other chords on its steps. The harmony thus obtained is proper to that particular scale itself and can be modal or tonal, depending on its use.

Mostly, degrees are formed by a construction of thirds, but this can also be done with other intervals.

New scales or modes can be derived from any particular scale, by using the scale on a degree of another scale. Thus the church modes, the harmonic minor modes and the melodic minor modes can be found, but one could also imagine this method as a starting point for harmonizing very different modes still, such as a Carnatic raga or a Turkish makam.

Degrees can be shown as part of a circle of degrees:

This modal approach does not always correspond to the functional tonal use of degrees, but does enlarge the number of possibilities. In such a way, modal elements can be added to tonal music.

We shall proceed however with the most basic triads, occurring not on the scales, but rather in the keys of, major and minor.

The basic major scale (in c consisting of basic tones) generates the degrees given below.

The basic degrees used in minor are given below (example in c minor) :

The major scale generates as seventh chords the degrees given below:

The basic degrees as seventh chords, as used in minor are given below:

As can be seen in these degrees, the use of the leading tone b here is restricted to the dominant degrees V and VII, but it does also occur as fifth in III and seventh in I. These more complicated chords are used more rarely but they do occur. The same can be observed with the 6th step of the scale, which was already encountered in the relative wealth of options offered by the minor scales, especially in the upper tetrachord 5-(b)6-(b)7-8.

The student should investigate the possible degrees and chords resulting from these different options. They are many, as both of these tones can serve as 1, 3, 5 or 7 of a chord.

More advanced use of degrees

In all keys, but especially in minor, there is a more colorful use of degrees than described in the basic examples above. Such advanced use can be seen to sound like borrowing and incorporating the sound of church modes into the key, such as the use of a Phrygian flat 2nd, the b2 as part of a temporarily underlying scale. Also the Lydian sharp 4, the #4 is commonly incorporated. Both of these tones have a secondary leading tone quality, as they harmonically point ahead to a resolution (b2 > 1 and #4 > 5).

If a dominant degree V is employed as resolving into another degree than a tonic, for example resolving to a clear II, we speak of a secondary dominant, symbolized by (V). Also a secondary leading tone chord (VII) is often encountered. These may or may not be accompanied by respective belonging subdominants, such as occurs in the example of (II V) > VI in which the II of VI is also out of the key. Secondary degrees are like “borrowed” from the key of the chord they are resolving into, including it being major or minor.

In general, the alteration of the 3rd and/or 6th note of the key leads to this phenomenon.

Although no general statistics can be given, and all occur in all styles and genres, Molldur is slightly more common in Classical and Jazz, whereas Pop music tends to use Durmoll more often.

The examples below give a progression in major, making use of all these more advanced elements:

And finally here is a corresponding one set in minor:

The analysis of each chord is given below (the degree symbol is traditionally placed below a chord), whereas the chord symbols are always written above the chords.

For easier reference, below a tentative catalogue of all possible concentric degrees is given. This overview – in the key of C major – should not be used as a general table for harmonic analysis, as degrees are relative functions of chords, and should always be evaluated in their context. Nevertheless, this overview may serve a purpose of preparing the student for many things which do in fact occur, concentrically, which means: without leaving the key (here: of C major). The very same chords should, when leaving the key, of course be analyzed differently, in relation to the key into which the modulation (change of key) takes place. 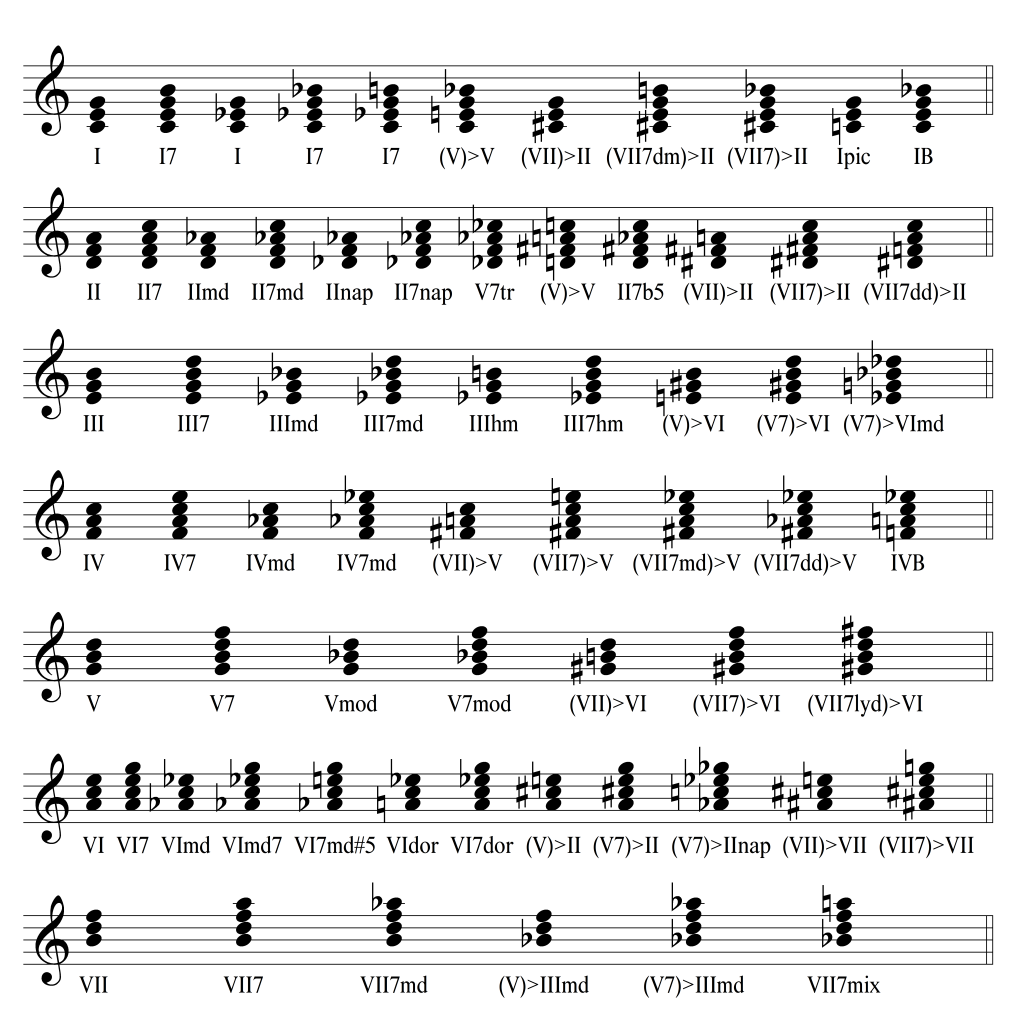 The degree symbols used here are by no means standardized internationally. There are many systems and nomenclatures in use today, often used solely in certain national schools of music theory.

For a progression which in the system above would be rendered as: II V VI III IV Ipic

other systems would use minuscule Roman numerals such as: ii° V VI III iv I

An advanced exercise in singing or determining degrees with c as a tonal centre in major and minor can be found here:

The concept of form in general depends on the human awareness being capable of distinguishing an object from its surroudings. An awareness without this ability to distinguish would be able to experience a totality of being, or stream of awareness, yet without objects, so it would not be aware of its own being itself at the same time, a state of mind often mistaken for nirvana, which does not use the full capacity of human understanding. To be aware of oneself and one’s surroundings at the same time, creates the awareness of identity and differences, the awareness of objects, or forms, themselves being identities, as such like yet apart from oneself, all separated from their surroundings by the boundaries perceived in time and space.

When thinking of “Form in art” one usually thinks of the visual arts, where forms are distinct objects in space. In music though, “Form in music”, “objects” are not primarily perceived in space, but in time. Both abilities, to distinguish between forms in space, and forms in time, develop at least from birth onwards, as a child learns quickly to not only distinguish the faces of its parents from other surrounding phenomena, but also their voices from other surrounding sounds. Both abilities depend on the function of ”memory”, yet the dependence on memory is stronger with sound, because sounds disappear in time and comparison has to always be done in memory2. Without memory, no awareness of form in music is possible: music is primarily (though not exclusively) a ”time-art”.

These philisophical considerations being mentioned, for this outline it is sufficient to mention that there are many forms in many music styles, and even concepts which transcend the concept of form, though not being something totally different. Below an incomplete list of examples is given of well-described forms, which are part of music theory:

This list of examples is far from complete of course, and intended to give a first impression of the wealth of musical forms that exist; it even contains different concepts of what can be considered musical forms, all in one list. Any fuller description of even just these, including the attempt of giving a more complete list of forms, would certainly have to become a book in itself.

The following musical form indications are customarily written in Italian:

In the following complex imaginary example all these are used to create a longer form in relatively short notation, as all bars are played several times:

The order for performance is rather complex and should run as follows: