Sound is the perceived complex phenomenon of vibrations traveling as pressure waves through a medium. For all living beings on earth this medium is either air or water. Such vibrations are called sound when they are perceived by (our) hearing.

There are thus three components in sound: vibration, medium, hearing. Generally, silence is considered to be the opposite of sound.

In music, silence is always relative to sound and sound volume, just as in visual art darkness is relative to light and lightness.

A musical sound can be recognized and defined by its pitch (or frequency), duration (or relative rhythmic value), timbre (color or instrument), dynamics (loudness) and position in space (relative to the listener)1. These musical parameters furthermore include the following concepts when applied to groups of sounds: register position(s), density, color palette, general loudness level(s) and spatial distribution(s). All music consists of related sounds and silences, which can be symbolized by notation.

Sound is perceived by our hearing, which is a result of our ears picking up vibrations in the air and translating these to our brain, where the perception of hearing comes to awareness2.

The ear translates vibrations in the ear into neural signals. Air-vibrations are received by the ear drum (tympanic membrane) and transmitted by means of the three extremely small bones called ossicles (as the fossil record shows, these originally evolved from jaw bones hundreds of millions of years ago), whose intricate lever-function is to reduce the amplitude of the vibration while increasing the energy transmitted, to the inner ear (labyrinth). The middle ear thus translates pressure waves (back) into mechanical vibrations. The inner ear serves two functions, those of hearing and of balance. The cochlea is the coiled part of the inner ear which translates the mechanical vibrations into pressure waves in its internal fluid, which are picked up by hair cells that convert their motion into electrical signals. These are in turn interpreted by nerve cells that transform them into electrical impulses that travel through the auditory nerve to structures in the brainstem for further processing. Hearing is a complicated mechanism! 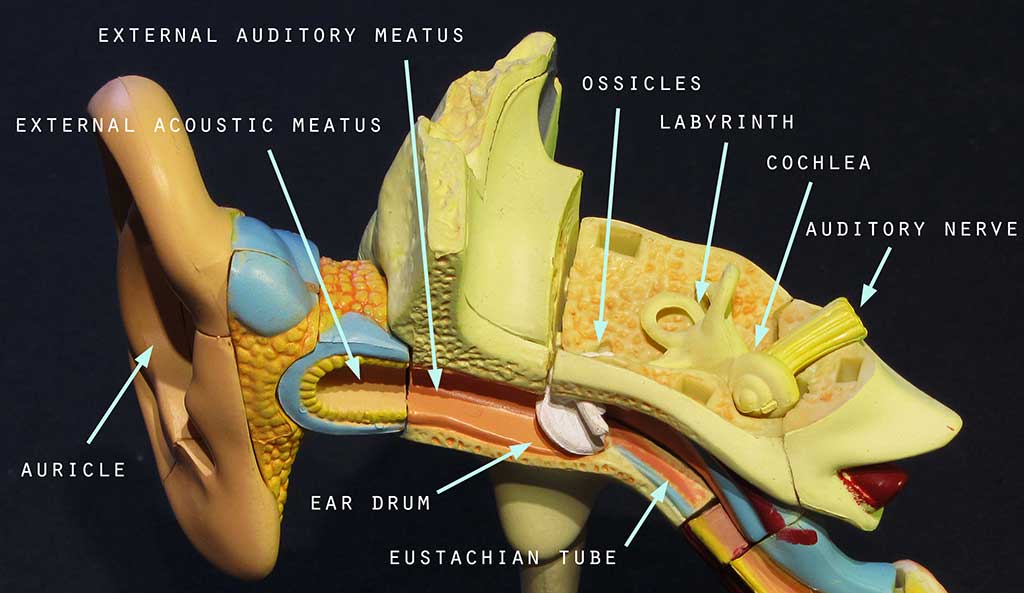 anatomy of the ear

Apart from having a vested interest in keeping one’s ears in perfect condition3, what most concerns musicians here, and hence music theory, is basic knowledge about vibrations, especially those that we recognize as tones, as pitches.

A tone is a complex combination of a series of regular vibrations, usually with one prominent frequency which is experienced as the pitch. A regular vibration is scientifically named a frequency, expressed in Hz (Herz), cycles per second. 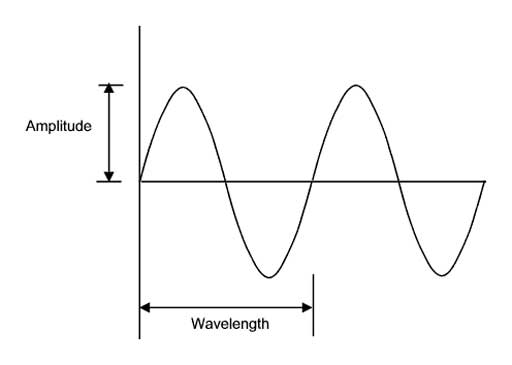 The amplitude of such a wave corresponds directly to the volume of a sound, the wavelength to its pitch, or frequency. Standard tuning in music today is usually to A=440Hz45 which means there are 440 vibrations per second to produce this tone. Although human hearing ranges between 25 to 20,000 Hz, the pitches actually used in music are roughly between 25 and 5,000 Hz.

Ultrasound, sound too high for human perception, is used by animals such as dolphins6, bats7 and mice.8

Infrasound, sound too low for human perception9, is found in larger animals such as hippos, elephants10 and whales11.

The basic regular vibration is a sine-wave, but all musical instruments actually produce a combination of various sine waves for each tone. Differences in these combinations are perceived as various colors of sound. Some examples of oscillograms are given below.

Most animals have a very different hearing (and correspondingly: sound producing) range from us humans. For example, elephants and whales hear and communicate with subsonic frequencies (infrasound) over vast distances, whereas bats and dolphins use a sonar system employing extremely high frequencies (ultrasound) to locate their prey at short range, especially in conditions where sight will not avail them12.

Various tones overlapping or sounding together will produce generations of audible combination tones in the inner ear, sum- and difference tones coming from the interference of their compound frequencies, producing complex harmonies and tensions between different tones, described by the subjective concepts consonance and dissonance.