Major scales in order of accidentals

It is possible to construct a major scale on every tone, and different accidentals are needed to induce the proper order of steps: whole, whole, half in both tetrachords (4 tone scale part). Without use of accidentals, only the scale of c major yields this strucure in both tetrachords: both c d e f and g a b c share this structure: 1 1 ½. These tetrachords are both connected to the fundamental c, the first has it as lowest, the second as highest note. The remaining interval f g is a consequence of this tetrachordal construction, and in itself a whole step (major second). The total scale thus shows 1 1 ½ 1 1 1 ½.

When constructing this on different tones, we can set the scales we find into the following order by number of accidentals, those we find having sharps:

And those we find having flats:

If we allow for the use of double sharps and flats, more scales are possible, but for practical reasons the keys (and hence the scales) remain limited to those employing a maximum of 7 accidentals.

Minor scales in order of accidentals

It is also possible to construct a similar series when studying minor. In order to obtain similar accidentals, we use the minor-parallel or parallel minor scale, or aeolian mode, which can be found on the VI of any major scale. VI of c being the a we find the following order by number of accidentals, with sharps:

And another series yet, employing flats instead, starting with the parallel of f, d:

Key signatures in order of accidentals 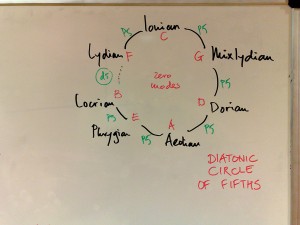 Note that both orders are based upon the diatonical series of fifths we discovered earlier:
either, for the sharps

or the reverse, for the flats 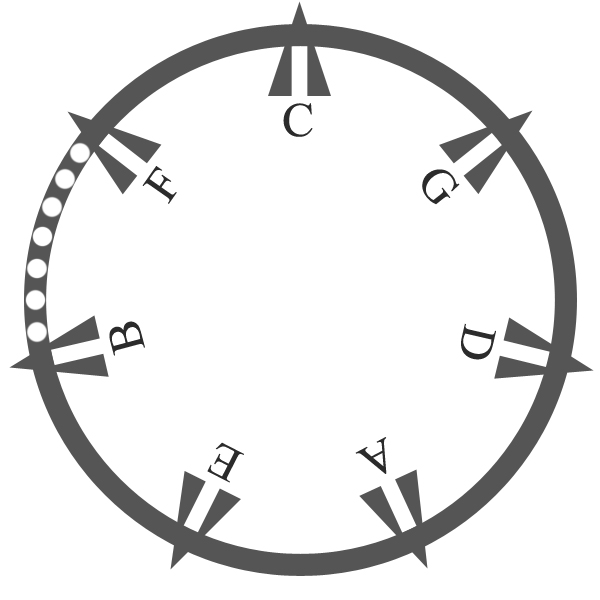 The order of appearance of sharps is fixed as:

the example shows the correction notation of the key-signatures with sharps on two clefs:

The order of appearance of flats is also fixed and the exact reverse as to the use of basic tones:

the example shows the correction notation of the key-signatures with flats on two clefs:

Geometry of the full circle of fifths

We can now summarize this structure and knowledge in the circle of fifths.

The image of the circle of fifths summarizes and visually represents the observations on major and minor scales and keys and the key signatures with number and order of sharps and flats, but it also allows a further geometrical look into the intervals, and their place within this representation. 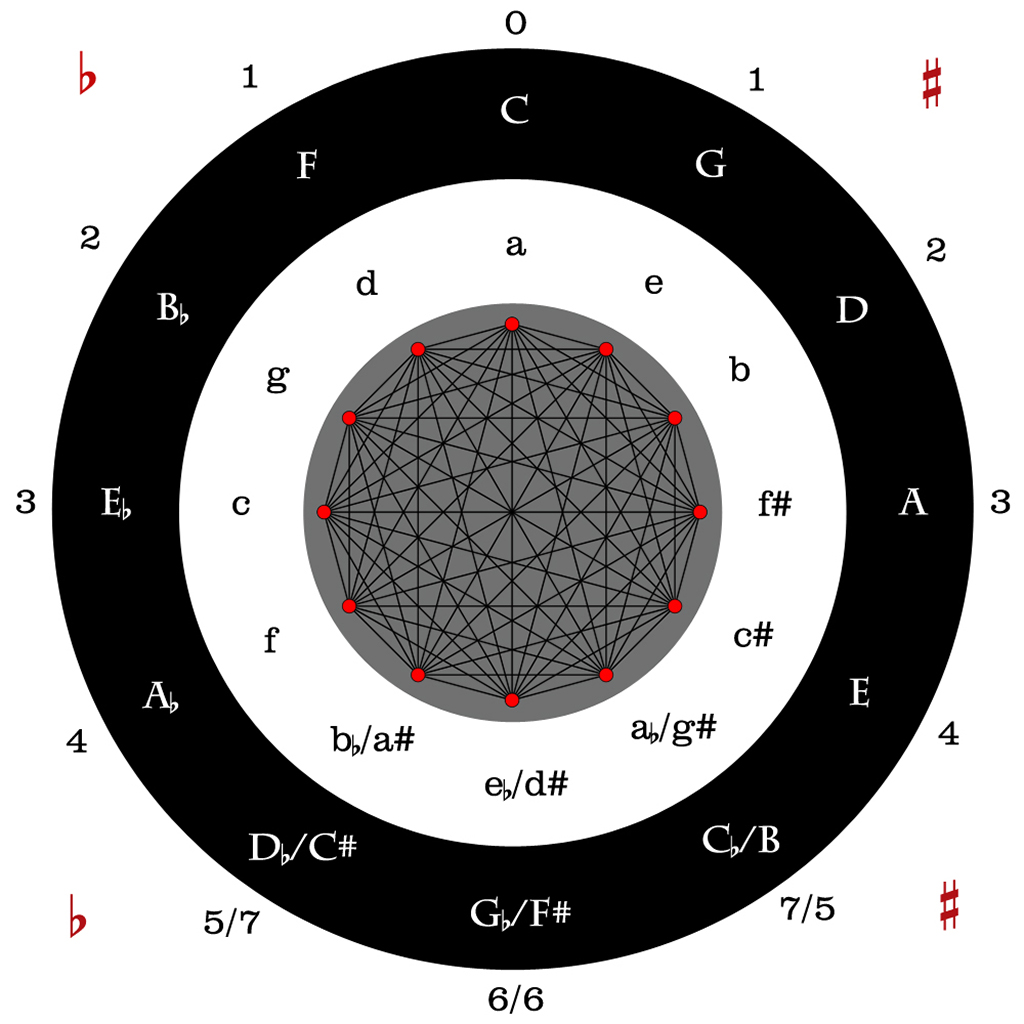 Here are some relevant observations which help in understanding and memorizing this visual representation of “musical geometry”:

Circle of fifths as interval calculator

The circle of fifths can also be used as an interval calculator, as shown below: 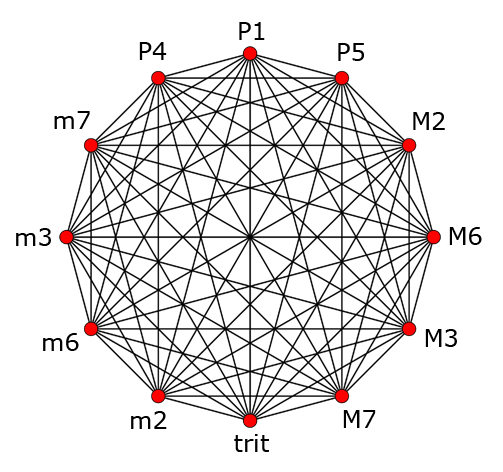 Circle of fifths as interval calculator

The Spiral of fifths and the Pythagorean comma

The whiteboard below shows the gradual development of the circle of fifths out of a series of basic tones, curled onto itself as a spiral: 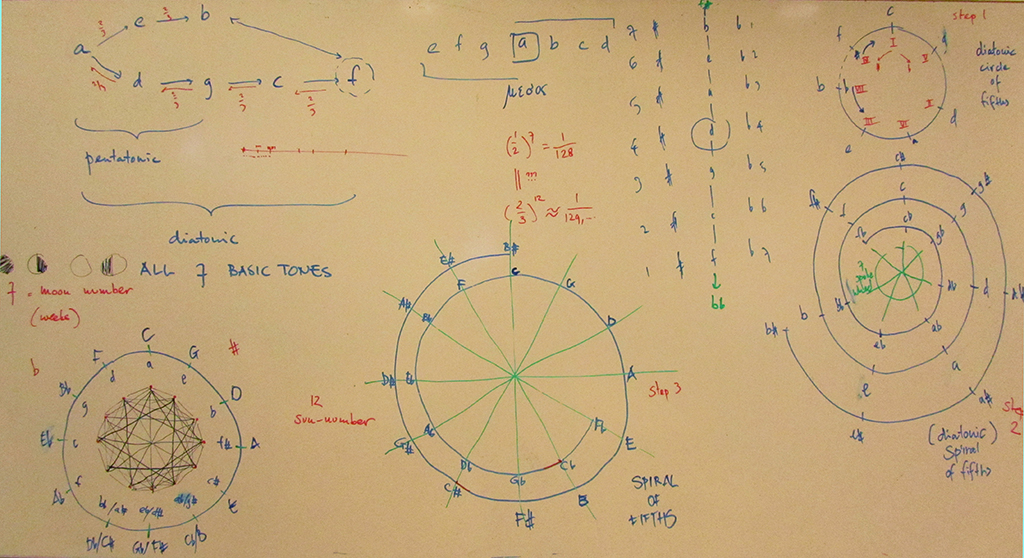 Making sure to check and gradually understand fully all of these steps towards, and observations on, the circle of fifths, will enable one to memorize it as more than a mere photographic image, but rather as a dynamic “Gestalt” or “Mandala”, implied by and underlying the tone-structure of the tempered tuning system. 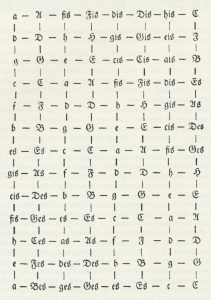 1817 Map of keys by Gottfried Weber

Gottfried Weber was the first to formulate a map of keys in 1817, defining four relationships to neighboring keys to any major key, leading to a 2-dimensional map of all keys:

Mind that in the original image, H stands for B and B stands for Bb (German nomenclature).

Below is shown the basic principle of the map of keys, rotated clockwise by 90°; horizontal lines are circles of fifths; minor keys are represented by minuscules. 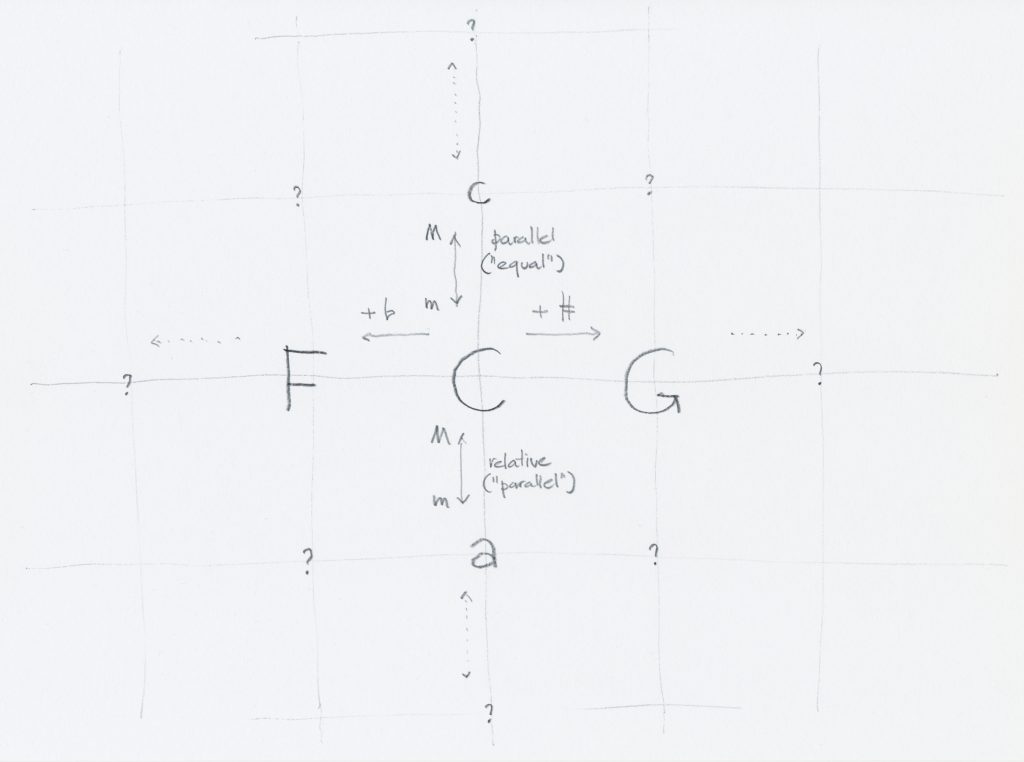 Basic principle of the map of keys

Here is a modest list of external links on the topic:

Transposition is the shifting of musical notation by a certain specific interval.

Transposition may be used in order for a certain musical instrument to play the correct tones, or to change the key of a composition, song, or part of any music.

The example below gives a melody in c then transposed for four different transposing instruments.

Please note that, when performed, all these different notations give the exact same pitches!

This is an example of a melody, written “in C“, meaning the pitches sound exactly as notated, in the exact register as notated:

As this instrument sounds a major second lower than notated, the music should now be transposed a major second up, not just the notes, but also the key signature:

As this instrument sounds a major sixth lower than notated, the music should now be transposed a major sixth up, not just the notes, but also the key signature:

As this instrument sounds a major ninth lower than notated, the music should now be transposed a major ninth up, not just the notes, but also the key signature:

A special and unique peculiarity occurs with transposing for a baritone saxophone: the noteheads happen to be on exactly the same positions on the staff when written in either clef, sounding in f-clef or transposed in g-clef the positions are identical and only the alterations differ.

This list is far from being exhaustive, see the footnotes for a link to a more complete list.