The advanced learning book can be found at Outline of basic music theory.

In a strict sense the words note and tone do not have the same meaning. Both can be notated, but a note is notated by its shape, and a tone by its vertical position on a staff. A note indicates a time value of relative duration, a tone indicates a pitch, a stable frequency of sound. Although musical notation uses both at the same time: notes are needed to notate rhythm, as tones are needed to notate melody and harmony.

Most written or printed music today makes use of a small set of notes, ranging from the whole note to the 1/16 note. To indicate silence, a set of corresponding rests exists as well.

In the example above, alternate directions are notated in the notestems, half of them are notated upwards and half downwards, and this suggests some grouping. Normally, stem directions depend on the position of a note on a staff: when it is high, the stem goes down, when it is low, the stem goes up. To more clearly show the rhythmical groupings, notes are always beamed together per beat, this means that the values flags are written as horizontal lines, as in the example below. In example 2, the exact same order is notated as before, but now graphically improved for reading:

Most sheet music is notated in either 2/4, 3/4, 4/4 or 6/8 time signature. A time signature groups notes into a certain number of beats, and also implies a subdivision of each beat.

There are 2 beats in a 2/4, 3 beats in a 3/4 and 4 beats in a 4/4 time signature. The upper number here indicates a number of beats, and the lower number indicates the 1-beat note (quarter note). These time signatures are also called binary (meaning: in 2), as each beat subdivides into 2. The basic note values of musical notation represent a binary system, as demonstrated in examples 1 and 2 above. In notation, the groups are called bars and are separated by vertical barlines. A piece of music always ends with a double barline.

A simple rhythmic phrase, using the binary 2/4 (pronounced two four) is given in example 3:

Note that in typing one writes 2/4, with a slash or line keeping the two numbers apart, but in musical notation no such (horizontal) line is written.

To practice such rhythms, I developed a series of exercises, called Rhythmic Building Blocks. This website contains two such pages in pdf, one for the binary time signature of 2/4, here it is:

Important is how to practice this, here are my recommendations:

If one understands how a 2/4 time signature “works”, a 3/4 and 4/4 are merely somewhat longer versions of the same thing, and should offer no special problems in reading.

A ternary time signature can also have 2, 3, 4 or even more beats per bar, but the difference lies in the subdivision of each beat: in three instead of in two. To keep these visually apart, they are written with the shorter note value of an eighth note, such as 6/8 (two ternary beats), 9/8 (three ternary beats), and 12/8 (four ternary beats). In this way, each beat consists of three “subbeats”, and is therefore ternary. The 1/8 note does note represent the beat here, but the “subbeat”: the underlying smaller value within each beat. Much blues music has a ternary feel.

A simple rhythmic phrase, using the binary 6/8 (pronounced six eight) is given in example 4:

As you can observe, the ternary notes and rests are notated with a dot · next to them. Such a dot makes a note or rest ternary (in three parts), or one can say that it adds 50%.

To practice such rhythms, there is also a page with ternary Rhythmic Building Blocks in 6/8:

Important is how to practice this, here are my recommendations again:

If one understands how a 6/8 time signature “works”, a 9/8 and 12/8 are merely somewhat longer versions of the same thing, and should offer no special problems in reading.

Next, and simultaneously in your practicing, you should also study the notation of tones, practicing the reading and writing, and the hearing and singing skills, which are at the core of music theory.

Internationally there are two systems of names for the basic tones:

To notate pitch, a 5-line staf is used, plus a clef to indicate the register. In example 5 you can hear and see the basic scale of C over almost the full range of musical registers:

The example above starts with a bass clef (also: f-clef) for three octave registers, and then the clef changes to treble clef (also: g-clef) just before the middle c. When listening to this example, we hear seven times the scale c d e f g a b in different registers, also called octaves. The eight note is the audible repetition of the same tone in a higher register 1=c, 2=d, 3=e, 4=f, 5=g, 6=a, 7=b and finally: 8=c. This eighth note is the octave. The word octave is derived from the Italian word ottava, meaning 8th. 8va is an abbreviated symbol (of otta=8 plus va) for purposes of notation, which you can see in example 5 where it is used for octavating the first seven tones down, and the very last eight up.

A second observation is that any tone is either through (also called: on) a line, or between two lines of the staff. In this way it can be seen at a glance which tone is notated. The five lines of the staff correspond to the number of fingers of one hand: the largest whole number all of us can immediately recognize without counting. When a tone is higher or lower than can be notated on the staff, extra lines are added to the notehead, these are called: ledger lines. They are slightly harder to read, and certainly require experience to recognize at a glance.

It is important to practice this, here are my recommendations:

Basic tones are called by simple letters, but these can be raised and lowered by special notation signs, the accidentals: flat and sharp. The white keys of a keyboard represent the basic tones, the black ones the alterations. 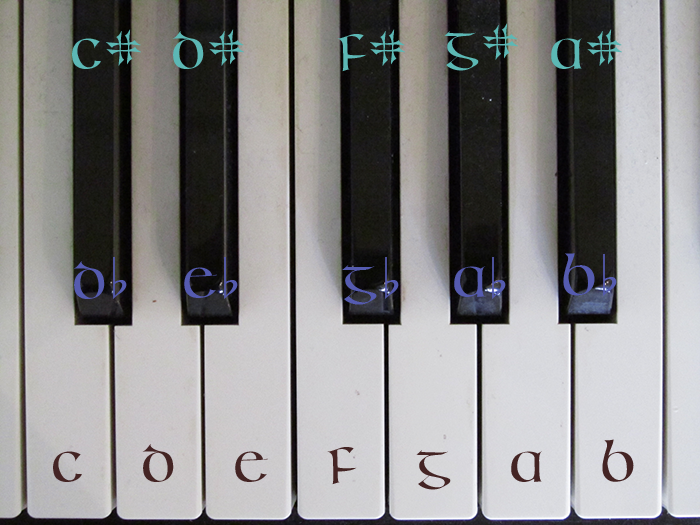 As can be clearly seen, the black keys have two names: one by lowering (flat or ♭) and one by raising (sharp or ♯). The two names are enharmonically equivalent: sounding the same but a different name.

Flat is sometimes represented by the letter b on a computer keyboard, whereas something like the sharp is already on the computer keyboard as the hashtag sign #. Each octave has 7 basic tones plus 5 alterations, which make up a total of 12 chromatic tones.

Two tones which are named differently but have the same sound or pitch are called enharmonic equivalences. They are enharmonically the same:

The pronunciation of the altered tone names is in reverse order as in notation:

In sheet music, flats and sharps appear either just before tones, or at the beginning of the staff at the clef as a key signature. Sharps and flats at the clef as a key signature are always at fixed positions, indicating a key signature, to be treated later. Incidental sharps and flats are written just before a tone, on the exact same tone position (but have no ledger line) and are valid for the tone immediately following, as well as for all identical tones in that bar only. The cancellation of any such an alteration is done by the natural sign ♮.