Utopia Suite is a project of Clive Holden, 6 parts of which were realized in collaboration with Oscar van Dillen.

Mean is a short film by Clive Holden with original music and soundscape by Oscar van Dillen. It is the very first part of the larger Utopia Suite project (2006-2020), a diptych made from VHS found footage and original Super 8 film, resulting in two film frames set into one HD frame, and exhibited in 35mm film or on Blu-ray Disc.

Program notes to the music and soundscape

The audio consists of a soundscape with noisy sounds, among which is a film projector running and a crowd ecstatically cheering some unmentioned political leaders, mixed with part of a recording of my toy piano piece mm3. The violent fighting by the hockey-players in the left frame coincides with the naïveity of the toy piano music, which is also deliberately slightly out of tune, as the performer plays 3 different toy pianos at the same time.

Engines of Despair is a short film by Clive Holden with original music and soundscape by Oscar van Dillen.

You are being remembered 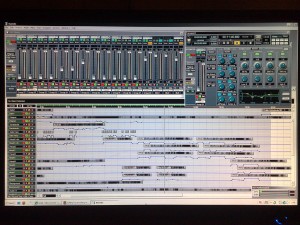 mixing you are being remembered

You Are Being Remembered is a video installation by Clive Holden with music and soundscape by Oscar van Dillen.

Program notes to the audio

You Are Being Remembered is part of the Utopia Suite project, and reflects remembering things past, which is represented by the use of old arrangements and recordings by Leopold Stokowsky from the 1930’s for the musical soundscape, while deliberately preserving their “scratched” character, thus creating a feeling of yearning.

This project is the first with the concept of simultaneous loops of different lengths. The twin screens here have different looping times of 24’11” and 22’30”, the music loops after exactly 20 minutes. The three loops gradually start diverging, just like memory gradually diverges from the actual reality in the past, both in time and content.

(click left and right buttons to play the screens simultaneously) 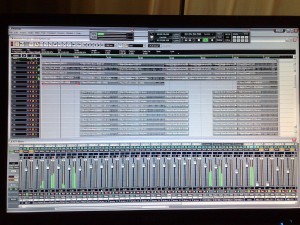 A very different musical style was chosen than was used in the earlier parts of Utopia Suite, this time reflecting the disco-music of the 1970’s, which I intertwined with odd world music rhythms and Indian melodic structures and instruments. Together with a soundscape using both electronics and tuned samples (an invention of my own: to tune samples to their musical context creates a new kind of “Varèsian consonance”). 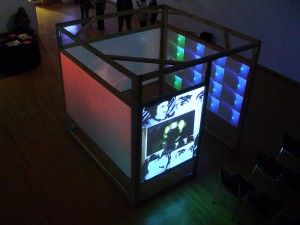 The two audio loops include one with melodies, harmonies and soundscape, and the other with the rhythm and beats. Moreover, each of the audio loops includes a 2-channel output, resulting in 4-channel surround sound as well as an additional subwoofer track, for a total number of five audio channels.

This project applies the concept of different, simultaneously looping durations. The installation’s four screens each have unique video loops, and the two audio loops are 60 and 74 minutes long each. These six simultaneous video + audio loops always present the materials in a new common context, with continuously re-mixing juxtapositions, thus continuously creating new meanings.

Ken Dryden is a looping web/computer installation by Clive Holden with original music and soundscape by Oscar van Dillen. 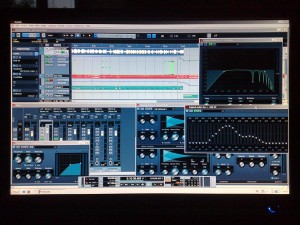 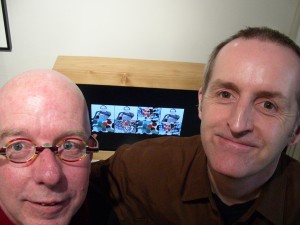 For the audio I used and reworked an old mono-recording of a radio-interview into stereo, and created to this a soundscape out of an original recording of a Turkish football-fans’ outdoor victory-party in Rotterdam (recorded from my balcony late at night after the 2008 European Soccer Championship’s quarterfinal). To this was added an especially written low timpani part, everything adding to and stressing the dramatic content of the interview, in which the Canadian sports-star, ice-hockey goalkeeper Ken Dryden, at the time already a very public person (he later twice became minister for his country), reveals practices of group sexual abuse in top-sports.

2 Cameras @ Sea is a film by Clive Holden, with original music and soundscape by Oscar van Dillen; the project was commissioned by the Images Festival.

A project description of 2 Cameras @ Sea on Clive Holdens website can be found here.

recording the atlantic ocean in normandy

Original music score and soundscape by Oscar van Dillen, the music can be performed live with the film.

Program text for the music 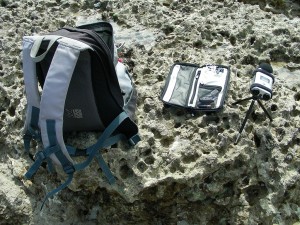 The music and soundscape for 2 Cameras @ Sea were developed and composed after a careful study of the movements of water and the sounds it produced. The larger movements I found in the salt water of the seas, increasingly so from the North Sea at several places in the Netherlands to the Channel in Normandy. The smaller movements of water I traced back to their origins in the sweet water of small mountain-brooks, high up in the Tarentaise. The obvious common element in music and water is the wave, and in both cases these waves can simultaneously happen on a completely different scale. In fact, I started treating individual tones as drops, phrases as waves, parts as tides, as it were working from the atoms themselves upwards. In this way the piece completely avoids any hint of programmatic music and has achieved its own flow. 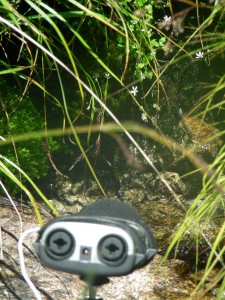 recording trickling in the mountains

The soundscape contains processed original recordings of the water sounds, and an interview with Martin Holden by his son Clive. Music and spoken text each take part in an auditive interplay: the layers of music, language and sound are unfolding their parallel stories and their form, substance and content, water and music, become as one.

I dedicate the score to Martin Holden, by whose outspoken wisdom it was inspired.

The score was commissioned by the Images Festival www.imagesfestival.com

World premiere 21 November 2008 during the Shift Festival in Muziekgebouw aan het IJ, and 2 April 2009 in Images Festival in Toronto.