Musicians have always studied music in two ways: both practically and theoretically, and both fields of study strongly developed in the course of history, and are in fact still developing. Though the two are fundamentally different, both share a common fate, in that each can only be fully learned from an accomplished master. Neither can be learned from books alone, as they both involve practical skills.

The purpose of this text is to provide a concise outline and introduction to basic music theory. This page is in fact a small book, with two companions, one for for reference: the page on music theory, and one for practicing: the page with exercises. This outline is ordered sequentially by topic to facilitate a stepwise growing understanding while reading. The reference page on music theory on the contrary, contains alphabetically ordered concepts, with clear definitions and further in-depth explanation.These two pages are complementary.

Thus this outline of basic music theory, and its first companion, the reference page on music theory, represent the groundwork for a complete professional course in basic music theory, with special examples and details for students in many fields, styles and traditions. It should also be of help to students in musicology, even though the study of musicology is different from that of musicians. The second companion page, containing all the exercises, exemplifies what a musician should acquire as basic music theory skills: auditive mastery of all the musical building blocks. Those musicologists whose more scientific approach to music is supported by acute hearing and listening, and by highly developed recognition skills, for patterns and building blocks, such as are developed in the study of music theory, will find the science of musicology to be in much closer rapport with the practice of music, which is its very subject matter. These practical skills can be gradually acquired in the study of music theory, in closest possible connection with knowledge of all relevant concepts.

The more one’s musical skills grow, the more rewarding it is to develop one’s musical theoretical skills as well. Ideally, music theory connects four fields of study, as represented in the diagram below: 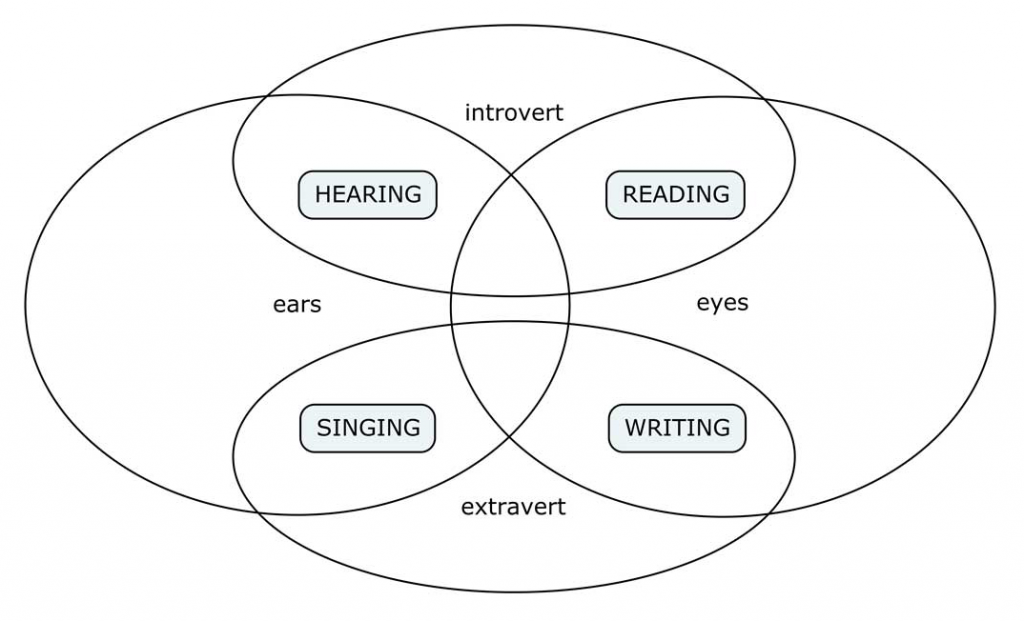 Music theory interconnects these four fields of study: hearing, singing, reading and writing, in the student’s awareness and brain, both as knowledge and as skill. It is not enough to know how something is or can be done (can be heard, read, sung or written), the practical skills to actually do so oneself should be considered to be included in music theoretical education and learning.

As to the term music theory, it denotes a wide field which is sometimes divided further into a putative separate understanding of a so-called Jazz-theory and a classical theory, or even further into Western theory; I attempted to bridge such gaps in this outline. I consider this publication as answering a need to formulate a basic “common theory”, simply because it comprises basic knowledge, tools, methods and models, shared in common by many musical styles and traditions, and which are commonly used in musicology as well.

With the emergence of ever more complicated models (which are generally presented in either visual or numerical form) for analyzing or even constructing or composing music, it suddenly becomes important to remind oneself always that music is made for the ears. When in doubt, the ears will convey the truth or falseness of any proposed system of evaluation. Though this has so far been a more or less subjective criteria, basically shared by all “knowing ears”, it probably won’t be long before neurophysiology, with contemporary measurement instruments such as the MRI scanner, will scientifically uncover the inner workings of the musical brain. With tools such as these1, future music theory can develop into a phenomenological interdisciplinary field of study, connecting art and science.